“If people aren’t laughing at your dreams, you’re not dreaming big enough.”

That was advice written in a card given to me at my high school graduation. It’s stuck with me ever since, and in a way, has motivated me to keep going beyond my imagination.

Peddles is a pig. An ordinary pig who does ordinary pig things. But there’s one thing that distinguishes Peddles a step above the rest… he’s got dreams. Big ones. He has ideas that go beyond the imagination of any other pig.

Peddles is just a pig who wants to do the extraordinary. He means no harm. When his friends tell him to stop being so spacey, it only leads to bigger dreams.

So what’s a simple pig to do? When days and nights go by that seem ordinarily boring, how can Peddles go where no pig has gone before?

One night Peddles hears whooping and hollering… and sees whirling and twirling. Just what, exactly, is going on inside the nearby barn?

Dancing, of course. When Peddles finds a pair of red cowboy boots in a bag behind the barn, it can only mean one thing. It’s time to dance. It’s time to put all of those big dreams to work and do something extraordinary.

But it doesn’t go well for Peddles, who fumbles and tumbles around in boots. However, when his pig pals pitch in, a dream comes true.

Using her signature style of watercolor and pencil, the author of our beloved Henny delivers us another heartwarming tale of what it means to dare to dream beyond what you ever imagined.

Children are natural dreamers. But from my experience, there’s too much that gets in the way. Adults… media… friends… can so easily squash a dream before it really even begins.

That’s why this book is important and timely. This is a story that reminds children what is capable when they think, dream, believe, and imagine beyond what we could ever expect of them.

Great things lie ahead when you dream. Don’t let others stop you. Dance, dream, and drift away to good things.

Peddles will hit shelves in early January 2016. It’s a title you’ll want for the little dreamers in your life. Readers will feel confident to dream big after reading this book… even if, even in spite of, people’s laughter.

The Food Network makes it easy for cooks who are tired of the same-old, same-old to try new adventures and recipes. If you don’t have access to the Food Network on TV, the internet also has an abundance of recipes waiting for cooks to sample.

Bruce is a (grumpy) bear who doesn’t eat raw eggs, and instead he likes to cook them up into fancy recipes that he finds on the internet. One day, Bruce finds a recipe for hand-boiled goose eggs drizzled with honey-salmon sauce.

Bruce rolls out his shopping cart and gets to work. He visits the river for some salmon; robs a hive of its honey, and snatches some eggs from a nesting goose. He returns to his den where he begins the preparations to make this delightful recipe. He sets the eggs on the stove, returns, and much to his surprise, four goslings have popped out of the eggs.

Of course, these four little ones immediately identify Bruce as their Mama.

Being the grumpy old bear he is, Bruce dumps the little birds in his shopping cart and hustles back to Mother Goose’s nest.

Much to his surprise, Mother Goose has already headed south for the winter.

Bear tries to leave the goslings behind, but they’ve taken a liking to him and follow him everywhere.

In this laugh out loud tale by Ryan Higgins (published by Dinsney-Hyperion), young readers will roar with giggles and delight as they watch the adventure of these little ones claiming grumpy Bruce as their own Mama and his work raising them, and eventually trying to send them on their way- south.

Ryan’s illustrations, use of color, and line make this a tale that readers will enjoy for years to come. This story is pure pleasure and joy for anyone that opens the pages and reads it together.

The facial expressions Ryan is able to convey with his illustrations are just perfect- for Bruce and the geese, as they learn to live with each other and become a family.

The little surprise twist at the end (which I won’t spoil!) is the perfect ending to a delightful book, and will keep readers laughing even after they’ve turned the final page.

This tale has quickly become one of my favorite titles not only of 2015, but of the best children’s books I’ve read. I enjoyed it from cover to cover and will get it into as many children’s hands as I can.

Buy a copy and settle down with your little ones and be ready to laugh until you cry with this new title.

I got a huge response to my call to tell me about 2016 books in my Facebook post!
Here is what I have so far.

Yes, I know some people are left out. It is not intentional; I just did not know about your book or couldn’t find the information. (Or you did tell me about it, but I had so many respond that I lost track of it. I am sorry! It is not intentional and I will be sure you are on PART TWO of the post!)

In the mean time, get out there and order the books, and let me know if I left anything out! 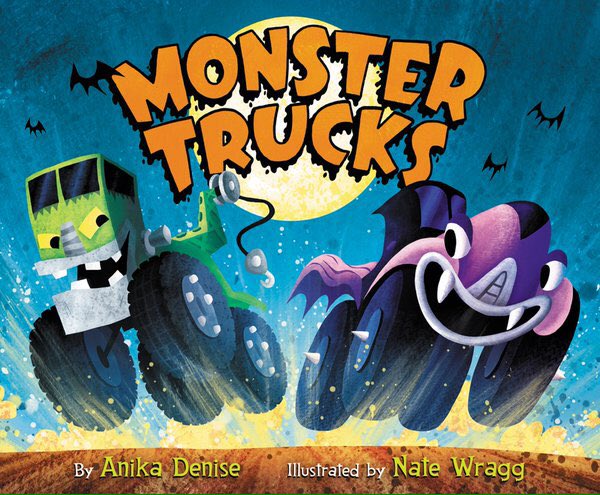 Be on the lookout for….

From Day One by Rosemary Wells

Catch a Kiss by Debbie Diesen

The Bot that Scott Built by Kim Norman

The Not So Quiet Library by Zachairah OHora

The Happiest Book Ever by Bob Shea

Quit Calling Me a Monster! by Jory John, illustrated by Bob Shea

This is NOT a Cat by David LaRochelle

Chicken in Space by Adam Lehrhaupt

Mary Had a Little Glam by Tammi Sauer

The Water Princess, by Susan Verde, illustrated by Peter Reynolds

Memoirs of a Parrot by Devi Scillian, illustrated by Tim Bowers

Some Writer! by Melissa Sweet

Charles Darwin’s Around the World Adventure by Jennifer Thermes

It is Not Time For Sleeping by Lisa Graf, illustrated by Lauren Castillo

Quack and Daisy Beyond the Meadow by Aileen Stewart

A Hop Is Up! by Kristy Dempsey, illustrated by Lori Richmond

Swallow the Leader by Danna Smith

I Am The Mountain Mouse by Gianna Marino

Still A Gorilla by Kim Norman

She’ll be Coming Up the Mountain by Kim Norman

Hooray for Today! by Brian Won

Mermaid Goldilocks and the Three Bears by Jan Brett

A Voyage in the Clouds by Matthew Olshan, illustrated by Sophie Blackall

I WILL NOT EAT YOU  by Adam Lehrhaupt, illustrated by Scott Magoon

Your Alien Returns by Tammi Sauer

Fit it Man by Susan Hood, illustrated by Arree Chung

I’ve never had the honor of revealing a cover before, and I am super excited for the chance to do so!

In this realistic and poetic picture book-look at the wide open west, the myth of rowdy, rough-riding cowboys (and cowgirls) is remade. A timely and multifaceted portrayal reveals a lifestyle that is as diverse as it is contrary to what we’ve come to expect.

Be on the lookout for ways you can pre-order this magnificent title!

Thanks Kate, Jonathan, and HMH!

When i was teaching first grade, I always encouraged students to slow down and enjoy the “now” and to wonder and marvel at the beauty that was at their very hands every day. One assignment was to find a rock, and we spent so much time simply “wondering” about our rocks. How could we ever tell the rock’s story? Where did it come from?

And that was just one instance. Since then, I’ve always been on the lookout for books that encourage students to expand their view of the ordinary and believe.

Joseph Kuefler’s Beyond the Pond does just that.

When Ernest D. learns that the ordinary pond outside of his home has no bottom, he sets off to explore. And, oh how exceptional it will be. The journey and the wonder begin.

Ernest D. and his dog go deep enough down that they come up in a world unknown. It was everything they wanted it to be… oh so tiny. Oh so tall, and everything in between.

Joseph Kuefler uses colors and a combination of mixed media, and photographed textures, to digitally create the illustrations in the book. The textures are perfect. The colors express the emotion of the new “land” at the end of the pond so well.

As the moon rises, Ernest D. and his dog dive deep back down to the other end of the pond.

And when they return, suddenly things seem so less ordinary. They seem…. exceptional.

And that’s the way it works with young children, too. When you start looking for the exceptional, and wondering about the ordinary, suddenly the ordinary becomes extraordinary.

Children are losing their sense of wonder. It’s our job as educators to instill that love of wonder and urge to be curious and explore what lies beyond the pond. We need more books like this. To encourage wonder, curiosity, and exploration of the ordinary. Because the ordinary is really the extraordinary, it’s just the way you look at it. How exceptional.