It’s a thrill to have Matt Tavares here with me today to share the cover for his Fall 2017 title with Candlewick, Red and Lulu.

Tell us a little bit about Red and Lulu:

Red and Lulu make their nest in a particularly beautiful evergreen tree. It shades them in the hot months and keeps them cozy in the cold months, and once a year, the people who live nearby string lights on their tree and sing a special song:

But then one day, something unthinkable happens and Red and Lulu are separated. It will take a miracle for them to find each other again.

But luckily, it’s just the season for miracles.

Red and Lulu is a story about the joy of Christmas, the magic of New York City, and the real meaning of the holiday season: just how important it is to be surrounded by love.

Where did you get the inspiration for this book?

Red and Lulu grew from a few completely unrelated story ideas, over the course of several years. It began with a pair of cardinals who visited the bird feeder in my yard countless times, finally inspiring me to write a story about them. I was struck by their devotion to each other, and wondered how far one of them might fly to be with the other, if they ever became separated. Meanwhile, inspired by the magic of New York City at Christmastime, I was working on a different idea for a nonfiction picture book about the Rockefeller Center Christmas Tree. But neither idea was coming together- until it occurred to me that maybe the story about the cardinals and the story about the tree might actually work together.

This book was a labor of love that started back in 2011. And even though it’s the first book I’ve written that features main characters who are not human, it’s also the most personal book I’ve ever written. I wanted to write about what happens when your world is turned upside down unexpectedly and you are forced to focus on what really matters. It turned out that these two cardinals were the right characters to tell that story.

Is this a wordless book?

My first version of Red and Lulu had about a thousand words. Then my editor and art director at Candlewick asked if I would consider turning it into a wordless book. I was excited about that idea, and spent months rebuilding the book as a wordless picture book. I printed a dummy of that, and shared it with friends, but found that while people really seemed to connect with the first version, there was something missing in the wordless version- sort of an emotional disconnect. So I went to my editor with both versions, and we worked on creating a sort of hybrid by adding back some words where they seemed absolutely necessary.

The final result is a book that has about 450 words (I think). Most spreads have words, but some are wordless. I do think that the process of trying to tell the story with no words really helped the book, and was a great exercise for me as an illustrator. I feel like I learned a lot about visual storytelling, even though this is my 19th book and I should probably know all this stuff by now!

What are you working on now?

I’m at the very early stages of another fiction picture book with Candlewick, slated for Fall, 2019. I also have a nonfiction idea I’m working on, about a girls’ basketball team.

Sure, here’s one of the interior illustrations from Red & Lulu! Thanks, Dylan! 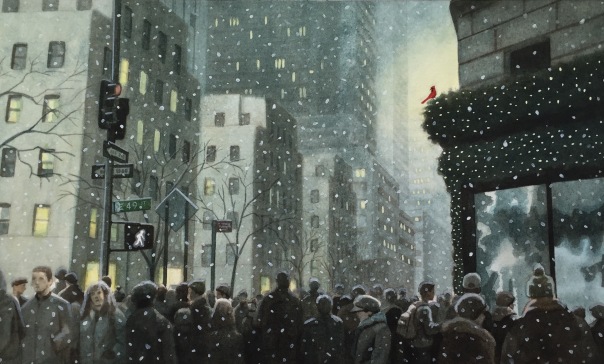