Hey Kelly! Thanks for joining me here to talk about your upcoming 2016 titles!

Tell us a little bit about One Little, Two Little, Three Little Children.

Thanks for inviting me, Dylan! One Little, Two Little, Three Little Children came to me out of the blue one day when I heard the opening lines of the book as a song in my head. I jotted down the lines and it didn’t take long before the whole song had pretty much sung itself. As sometimes happens, I got sidetracked with other projects and the manuscript remained tucked away in my computer files for nearly six years. One day I was scrolling through my saved documents and I came across the file. When I read it, I was touched by its simplicity and sweetness and I felt like it had a message the world needed to hear. I think it was only a few weeks later my agent, Steven Malk, sold it to Balzer + Bray. Mary Lindquist did a beautiful job illustrating the book and I’m very proud of the way it turned out. I hope it conveys the idea that families, no matter how they look or how they’re structured, are more alike than they are different.

Tell us a little bit more about Dragon Was Terrible!

Oh, Dragon. Where do I begin? He’s terrible. He scribbles in books. He plays tricks on the guards. And he even takes candy from baby unicorns. I had a great time writing this story. Some stories, like babies, come into the world with big voices and this was one of those stories. I don’t ever plan on using author intrusion in any given piece so it’s often a surprise to me when the narrator in my head ends up in the text. Greg Pizzoli illustrated the book and his art is hilarious. I think my favorite part is Dragon’s graffiti on the castle. I’m looking forward to sharing this book with kids this fall because it’s terribly fun.

Tell us a little bit more about Everyone Loves Cupcake!

Everyone Loves Cupcake is the follow up to Everyone Loves Bacon published by FSG. While there are some similarities between the two stories there are a few big differences. The illustrator, Eric Wight, and I both agree that we think Cupcake might even be funnier than Bacon but I guess that’s up to readers to decide. 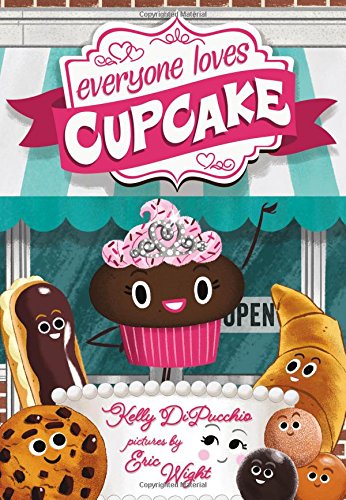 And, there’s quite a buzz over your first 2017 release, Antoinette.

What can you share with us about that book?  Well, as you can tell from the title and the cover this companion book to Gaston features one of the poodle puppies. But Gaston fans needn’t worry because our favorite Frenchie makes several appearances in the new story. I felt a great deal of pressure writing this follow up book because I knew expectations would be high. I didn’t want to just retell Gaston’s story from a different point of view. I felt like the plot in the second book had to be unique and stand on its own four paws. Christian Robinson’s illustrations, once again, are exquisitely charming and elevate Antoinette’s adventure to a whole new level. I can’t wait to share the story with readers on February 14th, 2017.

Have you always been into writing?

Hmm….not really. I have always been into reading. My interest in writing didn’t develop until I was in college, although I was always a fairly competent writer. I think most voracious readers naturally become decent writers because we’re subconsciously absorbing good storytelling skills with every great book we read.

What’s the most exciting part of your job?

Of course there are a lot of things I love about my job but most exciting for me would have to be seeing the art for a book for the first time. I’m always fascinated to see how an illustrator takes the words I write and then builds an entire world out of them.

What inspires your creativity? The magic beans in my coffee! Also meditation, other books, and nature. Even as a child I required a lot of alone time. When my appearance schedule is packed it definitely hinders my creativity. I’ve learned over the years that I absolutely need to create quiet space for my writing. I’ve never been the kind of person who could write in coffee shops or with music playing in the background. Ironically, even going to a writer’s retreat would be a creative road block for me. Only my dogs are allowed in my office when I’m writing!

What is one thing that readers don’t know about you, that only you could tell us? With the exception of picture books, I pretty much only read sacred texts and books about spirituality and the paranormal now.

If you weren’t writing books, what do you think you’d be doing? I’d probably be selling incense and essential oils in some bohemian crystal shop.

What can readers expect from you in the future, after Antoinette? I have a picture book about a brave raccoon coming out with S&S/Atheneum called Super Manny. It’s adorably and wonderfully illustrated by Stephanie Graegin. I’m also super excited about a new book I’m doing with Zachoriah OHora and Disney-Hyperion called Poe Won’t Go. It’s about a stubborn elephant who blocks the main road in town, causing an uproar from its citizens.