It didn’t take long for the world to fall in love with Mother Bruce- it won the hearts of many kids, teachers, and parents, and also collected many awards over the past year.

And now, it’s clear, that Bruce’s journey is far from over, as we see in the hilarious escapades of Hotel Bruce, by Ryan Higgins, from Disney Hyperion.

When we last left Bruce, he was soaking up the sun in the south with his geese.

Now, they’re on their way back. And Bruce is tired and grumpy, because instead of getting to hibernate, he’s been taking care of his geese.

When Bruce opens the door to his home, he is greeted not by a warm, comfy chair; instead, he found that mice had moved in and turned his house into… a hotel.

There are all kinds of problems that ensue: Bruce’s house is all in sorts; his bed is full of woodland creatures,and the animals are just plain noisy.

In one word, Bruce’s home has been upturned into total chaos.

Ryan Higgins is able to so perfectly convey the facial expressions on all of the animals, and especially on Bruce, who keeps his emotions in tact until a bad batch of turtle stew has all but destroyed his kitchen. 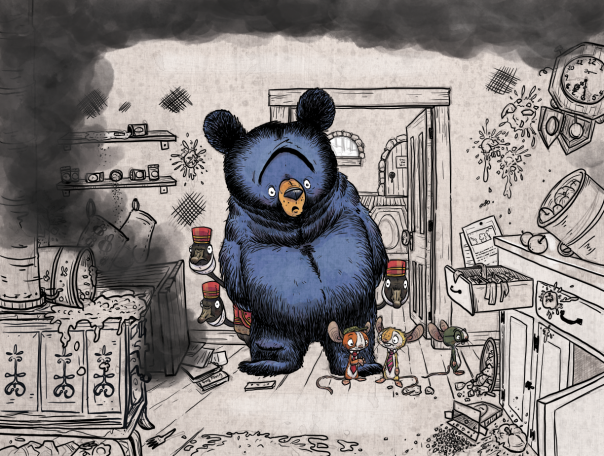 Just when you think things can’t get any worse, a van full of very obnoxious (and large) animals show up.

And finally, Bruce loses his cool. He hollers and throws his hands in the air before pointing to the door. “OUT!” he demands.

But the softer side of Bruce that we saw in Mother Bruce comes back at the end, which leaves readers with a satisfying conclusion.

Ryan Higgins has done it again- from the art, the dialogue, the storyline- Bruce is back, and I have a feeling that readers will welcome him back with open arms this fall.

Be sure you have Hotel Bruce from Disney Hyperion pre-ordered from your local bookstore.